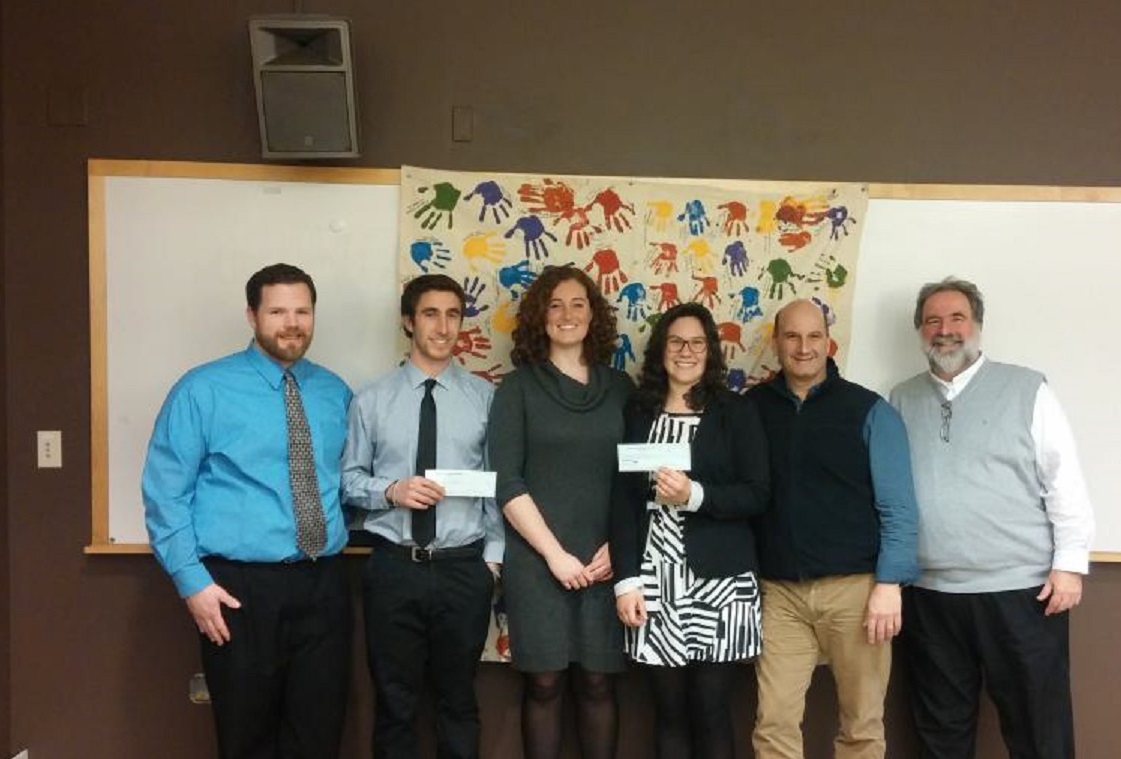 In August 2014, several UNH students traveled to Ghana, Africa where they spent three weeks embedded in their host community as part of the second phase (Site Visit) of their Senior Engineering Capstone Project.

For the last two years, this special group of students has been working diligently with their faculty advisors and project sponsors on the design-phase of a photovoltaic system that will provide solar power for the Liberation Takumi Community Elementary school in Toh-Kpalime, Volta Region. Their UNH advisors include Dr. Ray Cook, PE, Dr. Erin Bell, PE, and Dr.James Malley, PhD. 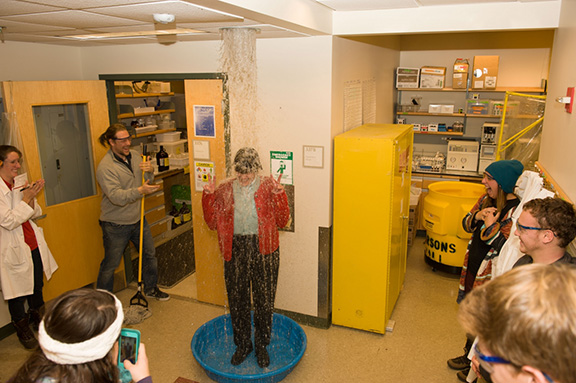 Lab safety took a zany, soggy turn Tuesday, when the Environmental Research Group tapped Nancy Kinner, professor of civil and environmental engineering, for a hands-on demonstration of the emergency shower in their Gregg Hall lab. Her dousing not only gave students and faculty experience with this important (if rarely used) piece of equipment, it raised funds for the student group Environmental and Water Resources Institute, which sold raffle tickets for the chance to pull the shower

Summer 2019  CEE 705/805/796/896 Introduction to Sustainable engineering
CEE 705/805 begins with exploration of the precept that we live in, and must design engineering systems for a world with a finite supply of natural resources and limited life support capacity.  This is nowhere more true than on an island; life on an island provides a unique lens through which to view challenges of water supply, energy supply and use, transportation, wastewater and solid waste management, communication, andpreservation of ecosystem services. CEE 705/805 is entirely on-line and is divided into 9 modules(one/week), co-taught by five faculty from UNH and UMass. On Thursday, July 25 at 9am, students and instructors will meet in Portsmouth, NH and take a boat to the Shoals Marine Laboratory where CEE 796/896 will be held for 5 days.  The field component at the laboratory will involve hands on application of the principles learned during the on-line modules.  Click here for more information, and here for course syllabus.

CEE 705/805 begins with exploration of the precept that we live in, and must design engineering systems
for a world with a finite supply of natural resources and limited life support capacity.  This is nowhere more
true than on an island; life on an island provides a unique lens through which to view challenges of water supply,
energy supply and use, transportation, wastewater and solid waste management, communication, and
preservation of ecosystem services. CEE 705/805 is entirely on-line and is divided into 9 modules
(one/week), co-taught by five faculty from UNH and UMass. On Thursday, July 25 at 9am,
students and instructors will meet in Portsmouth, NH and take a boat to the Shoals Marine
Laboratory where CEE 796/896 will be held for 5 days.  The field component at the laboratory will
involve hands on application of the principles learned during the on-line modules.
CEE 705/805 (1HY)
Credits:  3.0
Term:  Summer 2018- Special Session (5/20-7/22/19)
Class Size:  20
On-line registration begins March 25, 2019
100% On-line
CEE 796/896 (Co-Requisite)
Credits:  1.0
Term: Summer 2018- Special Session (7/25-7/29/19)
Class size: 20
On-line registration begins March 25, 2019
On Appledore Island

Dr. James Malley, elected to Executive Committee of the Board of Directors of American WaterWorks Association 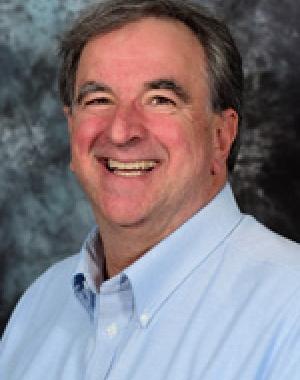 Jim Malley, professor of civil and environmental engineering, chairperson of the UNH CEPS Environmental Engineering Program and director of the UNH Environmental Research Group, was recently elected to the Executive Committee of the Board of Directors of the American WaterWorks Association (AWWA).  The AWWA is a 50,000 member association representing North America and the largest nonprofit, scientific and educational association dedicated to managing and treating water for human use. He will serve a three-year term and serve as chair of the association’s technical and educational council. 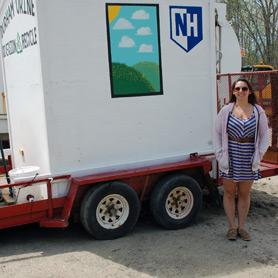 During the academic year, on Thursday, Friday, and Saturday nights between 10 p.m. and 2 a.m., the wastewater treatment plant that serves the University of New Hampshire experiences a surge in the amount of urine flowing into the facility. It’s not hard to figure out why, but for the plant, it’s no joke. The increase in urine flow is so dramatic that monitoring data from those time periods show peaks in the Student in front of Productive Diversion Vehicleconcentration of nitrogen entering the plant. Wastewater treatment plants have a maximum nitrogen concentration they are permitted to discharge, and the higher the incoming nitrogen concentration, the more resource-intensive and costly the treatment is. David Cedarholm, a UNH alumnus who works for the Durham Department of Public Works, brought the nitrogen spikes to the attention of Nancy Kinner, a professor of environmental engineering at UNH—and Kinner saw the potential for a learning experience.

During the spring semester of 2013, Kinner explained the problem to her engineering design class and said she hoped some of the students would design, build, and test a mobile urine collection unit on campus. Four seniors—three environmental engineering majors and a business major—turned the vision into a reality. They built a collection unit comprised of three bucket-shaped urinals enclosed in a shed and attached to a 264-gallon tank, all on a utility trailer. With permission from the UNH Police, the group parked the unit, which they called the Pee Bus, near downtown Durham—the center of campus nightlife—for four weekends. They flagged down students leaving bars to invite them to make a “donation.” Alyson Packhem, one of the project members, said the response was remarkably positive. “People were excited to try it out,” said Packhem, seen above outside the Pee Bus.

The Pee Bus team could have stopped there and simply delivered the urine to the wastewater treatment plant during a time of low flow. But instead they arranged for the urine to be pasteurized so it can be used as fertilizer, a practice being researched and field-tested in both developed and developing nations across the globe. (In the Northeast, the Rich Earth Institute of Brattleboro, Vermont, has been conducting a urine-fertilizer experiment since 2012.) Dorn Cox of Tuckaway Farm in Lee, N.H., is one of two farmers who agreed to receive the urine-fertilizer generated by the Pee Bus. Urine diversion for fertilizer is “an elegant solution,” Cox said, because it requires minimal treatment, the nitrogen is in a form that’s readily available to plants and bacteria, the fertilizer is easy to apply with a sprayer, and it takes advantage of a resource otherwise treated as waste. Cox said he hopes to see the practice adopted around the region. “We need to shift,” he said, “from talking about waste management to talking about nutrient management.” The 250 gallons of urine-fertilizer from the Pee-Bus will be pasteurized in time for the 2015 growing season. 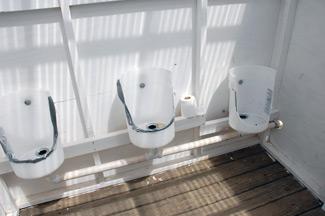 So, will buildings on the UNH campus be re-plumbed to divert urine? That may be too much to expect, but the UNH alum whose comments got everything started said he’s on the lookout for another group of students to keep the Pee Bus going. The Durham wastewater plant’s treatment costs could be notably lower if 10,000 gallons of urine a year were diverted. “That seems like a big number,” David Cedarholm said, “until you consider that UNH and Durham produce 8,000 gallons of urine a day.” 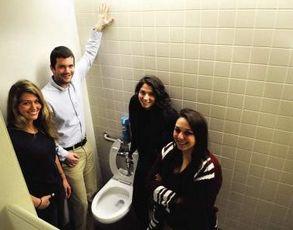 DURHAM — A group of University of New Hampshire students plans to collect human urine as part of a research project aimed at diverting liquid waste from treatment plants and instead using it as fertilizer.

With the town of Durham as a client, the foursome of whiz kids plans to roll out a urine-collection vehicle on March 20 as part of a serious senior project that's inviting jokes along the way. For example, the project has earned UNH senior Taylor Walter the nickname "Queen Pee" from her parents.

"Eighty percent of the nitrogen going to the treatment plant is human urine," Walter said.

Diverting that 80 percent from the plant would reduce town costs, as well as aid in protecting the Oyster River and Great Bay, she said.

To that end, the students plan to collect student urine in donated plastic bins that will be housed in a shed and towed on a trailer to a downtown Durham parking lot.

"We want to deal with all the liquid," said Adam Carignan, a UNH senior majoring in environmental engineering.

"We need urine, and they have it," said student Elizabeth McCrary.

"It's not only helping the environment, it's helping students," echoed Packhem.

The research students will be there educating the public about their project and aim to collect 264 gallons of urine during the first round.

Once collected, the urine will be stored at a Durham public works facility for several months to kill pathogens. Alyson Packhem, another UNH environmental engineering student, said granular carbon on the mobile urine collecting vehicle will control odor.

Walter said several landowners have volunteered to have the seasoned urine dispersed on their fields after the students receive a Department of Environmental Protection research permit.

By summer, the students hope to apply the urine to farm fields and see how it acts as a fertilizer, McCrary said.

As the senior project progresses, the students have been working with staff from UNH and Durham, Walter said.

Looking ahead, they're thinking about related innovations that could earn them patents, including an add-on to collect and recycle urine inside portable toilets.

They also plan to tow their urine-collecting shed to football games, outdoor concerts and a UNH "Solar Fest" in April.

Internal Notes:
A group of University of New Hampshire students is collecting student urine to be used as fertilizer. From left are Taylor Walter, Adam Carignan, Elizabeth McCrary and Alyson Packhem.

ERG is Teeming with MalleyCATS

By Ransom Richardson and Lee Friess

July 1, 2011 In 2008, a handful of students working on research with Professor Jim Malley in ERG named their group the MalleyCATS. The name is fitting since they are in the home of the UNH WildCATS, work with ERG faculty member Dr. Jim Malley, and possess many of the resilient attributes of alley‐cats.  The group, now 17 strong ranges from rising first year students to graduate students, operates on a shoestring budget, but works together with the common goals of learning how to do research, how to work together, and how to mentor others.  “We are given a lot of freedom in the design and the running of our experiments, but still get a lot of feedback and guidance with our research from Malley. Our research topics are really exciting and relevant to the real world.” (Harrison Roakes UNH ’12) Perhaps most importantly, they are learning to never quit on research ideas they are passionate about even when nothing seems to be going right. The MalleyCATS have involved 20 students to date including 10 members on campus at UNH for summer 2011 (Michaela Bogosh, RaeAnna Hughes, Cheryl Bentley, Ransom Richardson, Alex Rozycki, Harrison Roakes, KC Moran, Jihyon Im, Aidan Cecchetti and Rachael Kenny). The 2011 summer ‘CATS are working on four projects:  Evaluation of a pacific ocean floor intake system as a pretreatment to reduce biofouling in desalination systems, supported by Long Beach Water Department; Inactivation of Enterococcus species found in wastewaters and storm water overflows using UV disinfection, funded by CH2M Hill; Development of Innovative methods for Nitrogen removal, funded by several wastewater utilities throughout the US; and the development and testing of a point of entry water treatment system for small flows typical of schools in the Dominican Republic. “A lot of big institutions don’t have the research opportunities that ERG provides for us. I was able to find a group and research opportunities that I’m able to take ownership of and be proud to be a part of.”    (Alex Rozycki, UNH ’12) Other MalleyCATS are on the road this summer.  Senior MalleyCATS, Mark Gordon, is in the Netherlands performing his research on Suspended Ion Exchange (SIX).  Allie Bowen and Megan Good are spending their summer as interns at consulting environmental engineering firms Woodward and Curran and Arcadis‐Malcolm Pirnie, respectively.  Allie and Megan will be returning in Fall 2011 to continue their research interests and work on the removal of pharmaceuticals and personal care products from water supplies using membrane techniques.   Keep up the good work MalleyCATS, you are making everyone at ERG and UNH proud.