The Space Science Center fosters research and graduate education in all of the space sciences with studies ranging from the ionosphere to the Earth's magnetosphere, the local solar system, and out to the farthest reaches of the universe.

We are an experimental group and our instruments include ground-based neutron monitors and space based instruments on the Ulysses and IMP-8 spacecraft. The space-based instruments detect the energetic particles directly, while the neutron monitors detect secondary baryons produced by particles (mostly Galactic cosmic rays) colliding with nuclei in the atmosphere. We also have an active instrument development program with the goal of producing innovative new instruments for future space flight opportunities.

This is a collaboration of researchers working on several distinct Space Science projects. The 14 Professors, Research Professors, and Research Scientists in this program are using data from UNH instruments carried on the ACE, AMPTE, Cluster, Equator-S, FAST, IBEX, Polar, STEREO, SOHO, and Wind satellites. In addition, UNH researchers are actively involved in the development and building of the Magnetosphere MultiScale (MMS) and Radiation Belt Storm Probe (RBSP) missions. Data also are taken by instruments on sounding rockets and by ground based detectors. Most of the UNH experiments have concentrated on the measurement of electrons and of ions with various charges and masses. These data are analyzed in conjunction with magnetometer and electric field data measured by detectors developed either at UNH or at other collaborating institutions. The regions studied range from the solar wind or interplanetary plasma to the Earth's bow shock, magnetosheath, magnetosphere, and auroral regions.

This group has carried out studies from high altitude balloons and from spacecraft. The principal UNH satellite based studies were carried aboard the Solar Maximum Mission and the Gamma Ray Observatory satellites. The UNH detectors measured emissions from the sun and from a number of galactic sources. Galactic gamma rays often are produced by the most dynamic and highest temperature plasmas in the universe. Efforts have concentrated on identifying and mapping sources, on studying the time dependence of emissions, on determining the spectrum and line structure of the sources, and on studies of the cosmic diffuse background radiation. The student designed CATSAT satellite, which is described separately below, is built to study gamma ray bursts. 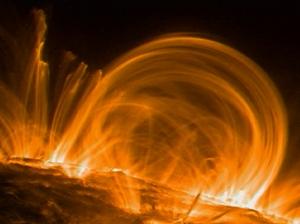 This group concentrates on theoretical studies related to the sun, with emphasis on the solar corona, solar flares and coronal mass ejections, the solar wind, cosmic rays, and the heliosphere. Major research areas include particle acceleration and transport throughout the heliosphere, and the heating and acceleration of the solar plasma. The group seeks to understand basic plasma physical processes such as magnetic reconnection, the nonlinear evolution of waves, and magnetohydrodynamic turbulence, and the roles those processes play in observed solar phenomena.

The theoretical plasma physics group uses analytical and numerical methods to address a wide spectrum of problems of relevance to space, astrophysical, and laboratory plasmas. Germaschewski is involved in fundamental research on magnetic reconnection with applications to magnetospheric substorms, solar coronal heating and flares, and magnetic island dynamics in fusion plasmas. Raeder's research focuses on the global modeling of Earth's magnetosphere-ionosphere-atmosphere system to study the interaction of the solar wind with Earth's space environment. Besides the basic research aspect, that is, understanding the plasma interaction of planetary magnetospheres, this research has practical applications in the area of space weather effects, that is, harmful effects on technological systems, for example, satellites or power grids.

Thunderstorms and lightning remain poorly understood, despite being among the most widely recognized and dangerous natural phenomena on Earth. The lightning group performs experimental, theoretical, and modeling research to answer the key questions regarding the physics and effects of lightning and thunderstorms. We investigate thunderstorm electrification, lightning physics, X-ray and gamma-ray emissions from thunderstorms and lightning, transient luminous events (jets, sprites, elves, etc.), and their impact on earth’s atmosphere. We also study the fundamental electrical discharge processes and the plasmas created by them.