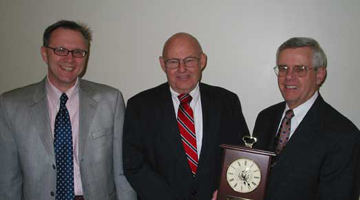 In the wake of the mass killings at Virginia Tech last week, the University of New Hampshire received one of its most meaningful gifts of all time: a mass notification system donated by UNH Alumnus John Olson, president and CEO of Whelen Engineering Company.

During the horrific hurricanes in the South last year, it was the Whelen mass notification systems, installed at chemical plants along with Mississippi River, which worked through the stroms because they were the only ones that could also operate on powerful battery back-up systems.

"I can tell you," Olson said, "that Whelen mass notification systems have saved lives. I'm pretty proud of that. If this gift makes the UNH community sleep a little better at night -especially the parents of all those students - then I'm really happy to make that possible."

Whelen Engineering has headquarters in Chester, Conn., and Charlestown, NH.

"The events in Virginia highlighted a vulnerability that all college and university campuses share," said J. Bonnie Newman, UNH interim president. "John Olson's willingness to donate a notification warning system to UNH to enhance our emergency preparedness programs is nothing short of remarkable. This is, quite literally, a life-saving gift if we ever have to use it."

Olson was on campus last week to receive the Distinguished Alumnus Award from the College of Engineering and Physical Sciences (CEPS) for his outstanding achievements, including giving more than $1 million for a scholarship endowment to CEPS that provides need-based scholarships for students. Olson, who gradutated from UNH in 1957 with a degree in mechanical engineering, also contributes to the university's Project 54, a technology that gives police voice-activated control devices such as sirens, radios, records checks and radar equipment.

Last week, it turned out he had more than the award on his mind.

"Someone came into my office with a news story that our clipping service picked up,"Olson said. "It was about UNH's desire to purchase and instal a notification system for the Durham campus. When I thought about students, faculty, staff, and everyone's families in Virginia, I knew I could help out my alma mater."

Olson said he called his vice president of mass notification systems. He said to him, "Let's make this happen."

Used by colleges and universities around the world, a system knwn as Student Alert has the capability to warn a campus community by first issuing a siren warning and then following up with a deliberate and powerful voice message. This two-step approach, called Alert and Infrom, helps reduce confusion and restore order.

It has been installed worldwide in academic institutions as well as the public and private sectors. Whelen Engineering built its first notification system in the mid-1970s, used primarlily by communities in the Midwest to alert residents to natural disasters, especially tornadoes. By 1980, in the aftermath of Three-Mile Island, his system was required of all nuclear power plants in the country. The country of Denmark purchased the system and there are 1,244 sites throughout that country, all controlled from one location.

UNH has an extensive and comprehensive emergency preparedness plan, according to Brad Manning, director of environmental health and safety. "Even before the Virginia Tech tragedy, we were aware that our only means of communicating an emergency to the entire campus is through blast emails and voicemails to the community," he said. "And after last week, we knew we had to improve our notification to our students, faculty and staff. The Whelan system is a dream come true for those of us responsibile for managing major campus crises."

However, Olson has additional plans for the customized UNH system. "Not only can we customize a system for UNH for mass notification of a campus emergency, I can have my team program a bugle reveille to play at 5:30 every morning to get the students out of bed!"