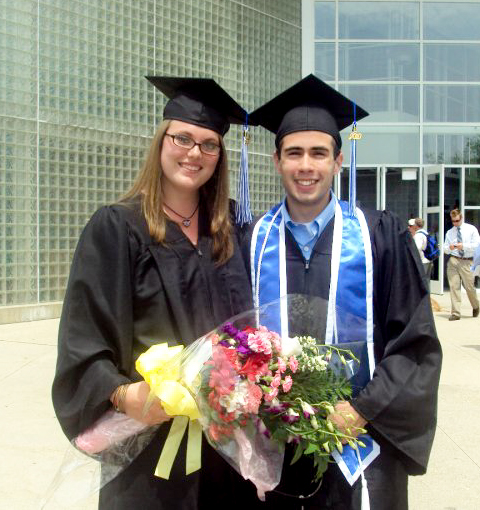 Samantha always knew she wanted to be a teacher when studying chemistry at UNH. Right after graduating, she obtained her Statement of Eligibility to teach in New Hampshire and has been doing so ever since. She is currently a chemistry teacher at Nashua High School North where she has been working since 2011. She has earned her Master in Education in Administration from UMass Lowell, and is currently in a program through UNH Manchester to get certification in ESOL education. She is in her second year as Department Head at North and loves interacting with her students and coworkers every day.

Nick went to MIT after graduating and earned his Masters in Organic Chemistry in 2012. After serving as a scientist in drug discovery at ARIAD Pharmaceuticals, he began to appreciate and transitioned into intellectual property at ARIAD. After starting in the night program at Suffolk Law while at ARIAD, he moved to the intellectual property law firm of Finnegan, Henderson, Farabow, Garrett & Dunner, LLP. Since starting at Finnegan, he has gained experience in patent prosecution and litigation matters in a variety of technologies including pharmaceuticals, nanoparticle formulations, polymers, fuel cell technology, and biomedical devices. Nick anticipates graduating from Suffolk in December, 2017. Nick feels that the rigor, depth, and breadth of the UNH chemistry program prepared him well for the challenges of graduate school, drug discovery, and the legal matters he works on now.

Nick and Sam met as chemistry students in the old organic teaching labs in Parsons and after many years of friendship, they started dating two days before graduation in 2010. After many years, Sam and Nick tied the knot in August, 2016. They fondly look back on their time at UNH, specifically the bonds they shared and people they met during all the many hours in labs, lectures, and the chemistry library. They have continued contact with current members of the Boston Professional Chapter of Alpha Chi Sigma with whom they were brothers in Mu chapter at UNH as undergrads. They currently live in Saugus, MA with their cat Pewter and their dog Lily.